Join us for a book launch event “Memory Activism and Digital Practices after Conflict: Unwanted Memories” by Orli Fridman, published in 2022 by Amsterdam University Press. The event will take place at Endzio HAB (Dobracina 4, Belgrade) on November 28, 2022 at 7 PM. 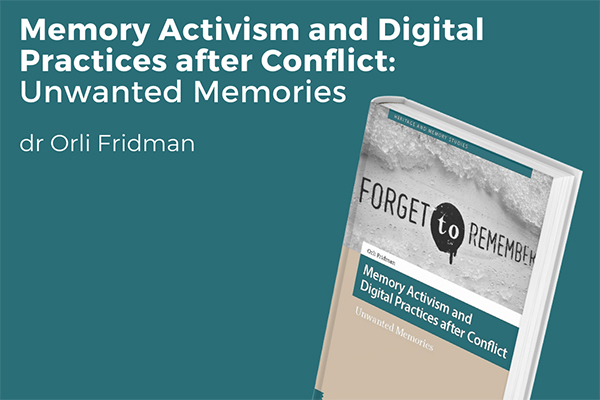 The panel discussion will be moderated by Prof. Igor Stiks, and attended by:

The event is supported by the Department of Political Studies at the Faculty of Media and Communications (FMK), and hosted by Endzio HAB and the Youth Initiative for Human Rights in Serbia.

Dr. Orli Fridman is Associate Professor at the Belgrade-based Faculty of Media and Communications (FMK), Singidunum University where she heads the Center for Comparative Conflict Studies (CFCCS). She is also the Academic Director of the School for International Training (SIT) learning center in Belgrade, Serbia.
Her interdisciplinary research focuses on critical peace and conflict studies, memory politics and memory activism. In the past 2 decades she has been studying processes of conflict transformation in the post-Yugoslav space, and memory activism that has emerged from the study of anti-war activism during the wars of the 1990s in Serbia. She has published extensively on Kosovo-Serbia relations, from the perspective of everyday peace and peace formation from below.
Among her current new research projects is a comparative study of alternative commemorative events, which includes new empirical evidence from The Israeli-Palestinian joint Memorial Day Ceremony.

You are using an outdated browser which can not show modern web content.