The Center for Comparative Conflict Studies (CFCCS) at the Faculty of Media and Communications is organizing the 13th International Summer School in Comparative Conflict Studies. From June 20 to June 25 2022, we are offering 5 online courses which will include synchronous lectures, group discussions and smaller working groups to allow interaction between participants and lecturers. 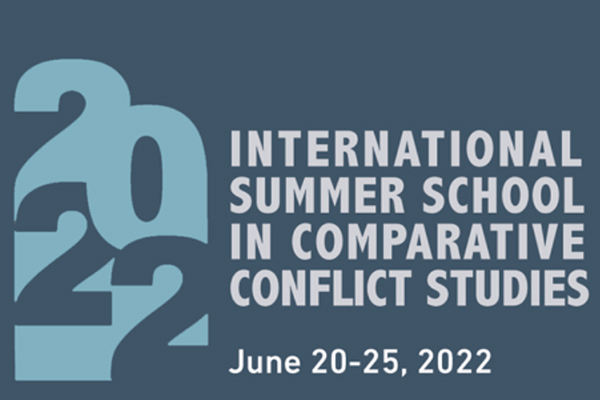 The International Summer School in Comparative Conflict Studies is part of the Politics department at the Faculty of Media and Communications and the MA program in Political Studies. The school provides a learning opportunity for students interested in the study and analysis of societies in and post-conflict.

Language of instruction for all courses is English

Students who complete the course requirements may transfer 5 ECTS course credits to their home institution (please note, it is the student’s responsibility to verify with your home institution that you are allowed to transfer ECTS credits).

Applicants can attend one of the following courses:

Feminist Peace and Security Studies: The Gendered Continuum of Peace-War

This course focuses on the adjacent fields of Feminist Peace Studies and Feminist Security Studies, which explore issues of peace/ war/ conflict/ security from a variety of feminist perspectives. Scholars working in these overlapping, as well as complementary, fields ask questions about the gendered nature of (conceptions of) peace and war, both in terms of how gender norms shape peace and war as well as how these, in turn, reshape gender norms. The feminist scholars also consider gender relations as causal in militarization and war, making connections across the continuum of violence that spans peace-wartime.

To introduce student to insights from this feminist literature, the course focuses on four main areas: How have feminists challenged the meanings of key concepts such as peace and security? What happens when we study armed conflict while also paying attention to femininities and masculinities? What can we find out when we ask feminist questions about soldiers and the militaries? How has feminist activism, exemplified in the adoption of the so-called Women, Peace & Security agenda at the United Nations and of the International Treaty on the Prohibition of Nuclear Weapons, affected global security environments? The recent Russian invasion of Ukraine makes a gender analysis of the efficacy of this Treaty particularly urgent and salient, and the course will devote some time to this as well as other feminist interrogations of the current conflict. The course illustrates the theoretical discussion through practical examples taken from feminist research on violent conflicts, as well as their aftermaths, around the world (from Afghanistan to Liberia, from Guatemala to Israel, from Rwanda to India). In this course, students will also learn the tools to carry out their own analyses of peace and war from a feminist perspective.

What happens to societies after genocide and mass atrocities? How do survivors pick up their lives in the aftermath of mass killings and war crimes? Can one come to terms with mass atrocities committed against one’s family and ethnic/racial group? Can one forgive and reconcile?

This course will introduce students to the field of transitional justice which is an interdisciplinary field of study focusing on processes of dealing with past human rights violations and the transition to more peaceful and democratic states. The course deals with questions that arise in countries emerging from armed conflict or from periods of authoritarian or repressive rule. It will focus on strategies available to societies in the aftermath of massive violations of human rights to re-establish the rule of law and build sustainable peace.

The course will introduce students to the evolution of transitional justice theory and practice, including truth commissions, trials and traditional practices, in such contexts as post-apartheid South Africa and post-genocide Bosnia, Cambodia, Germany and Rwanda. The course will raise a series of thought-provoking questions such as how mass atrocities affect states and their neighbors? What lessons did the UN learn from its experiences in dealing with mass atrocities? What are the pros and cons of prosecuting individuals for mass atrocities? Can multi-million international courts bring justice to survivors of war crimes?

Security, Conflict and The Rise of Illiberalism

This course invites students to explore the relations between security, conflict and peace. More specifically, the course investigates how national security policy, security sector governance and security practices are used to undermine or re-strengthen liberal democracy and peace in Europe and Euroasia. The assumption behind the design of this course is that security governance is an inevitable target of autocratization, for three purposes: (a) guaranteeing impunity for those abusing power; (b) selective enforcement of rules by police and judiciary on the behalf of aspiring autocrats; and (c) legitimization of elite and governance through securitization. We will examine how security discourses and practices beyond deployment of violence are used within states or across state borders to manage political competition and conflicts. The course will critically look at the effects of security practices as they appear under the label of ‘liberal peace-building’, and ‘authoritarian conflict management as a form of wartime and post-conflict order’. Finally, it will critically investigate how they co-exist in the current global order.

The course’s empirical focus will center on security governance within both ‘old democracies’ and post-communist countries, as well as their export of ‘liberal peace’ and ‘illiberal peace’. The effects of security practices will be studied in the cases of the Western Balkans, Hungary, Turkey and Central Asia.

The course will also feature a combination of reflective and research assignments (Country Case Studies) and two hands-on workshops: (a) how to research security policy and (b) how to engage in policy advisory work on security reforms. In this way, the students will be able to get an understanding of the complexity of security as a public good and of the political and practical challenges to the provision of human and national security while attending to the foundations of democracy.

The Politics of International Intervention in a Changing World Order

December 2021 saw the thirty-year anniversary of the collapse of the USSR and with it the end of the Cold War. Events throughout most of the twenty-first century, however, have given rise to debates about whether we are witnessing a new Cold War and therefore a resurrection of old divisions. At the same time, arguments are made about the end of the American Century and the rise of China, with attention in the last 10 years or so pivoting eastwards to the Indo-Pacific region. Despite continued wars in the Middle East, reinforcing the sense of the resurrection of old divisions between East and West, it is the Indo-Pacific region that has been widely considered to be the place in which a major international confrontation would take place.  Instead, 2021 ended and 2022 began with eyes focused on eastern Europe following Russia’s increased military build-up on Ukraine’s borders.

In early February 2022, Russia and the US confronted each other at the United Nations Security Council, each charging the other with provoking war. On February 24th Russia launched a further (after Crimea in 2014) invasion of Ukraine. Before then, commentary had ranged from the need to defend Ukraine’s sovereignty militarily to arguments that counselled diplomacy, even appeasement, references made to World War II, partition and spheres of influence. Commentators invoked memories of post-war Berlin, Hungary in 1956, Czechoslovakia in 1968 and further afield to Cuba and the missile crisis. Thus, just a few short years since we commemorated the centenary of the end of the First World War, Europe – even the world – is again looking distinctly dangerous.

This course invites students to study conflict and the available means for avoiding or resolving it. In this current new world order and attendant uncertainties, the course will equip students with the analytical IR frameworks to address and map conflicts in the twenty-first century, with a clear focus on understanding the scope and scale of international interventions past, present and potential.

This empirical mapping will be followed by an exploration of those key concepts that are necessary to understand why conflict occurs, state and international organisations’ responsibilities in respect of it and the ways and means in which interventions occur. Students will then be asked to align understandings in respect of these discussions with IR theorising, offering possible explanations for differing views on what constitutes an effective intervention.  In the final part of the course, students will select case studies to explore and critically analyse the politics of international intervention in order to understand where we are today and how we got here.

How to define citizenship in our confusing and uncertain times? Is it based on the idea of membership, equality and participation only? Or exclusion, conflicts, wars, and our perception and construction of enemies might have a strong influence on how we perceive ourselves as citizens as well? What is our political community or do we necessarily have multiple identities? To whom do we owe loyalty, global humanity, nation-states, regional alliances, our ethnic and religious group? What happens when we cannot agree about the nature and institutions of our communities? Or when we descend on the streets and squares? For what do we fight? Global justice, climate, gender equality, national interests, or our cities and lifestyles?

Citizenship is a tool that can be used for different and opposing goals, from integration and re-unification to fragmentation, division and ethnic engineering. It could be classically understood as national citizenship, but also as European, ecological, sexual and urban. The study of modern citizenship, as theory, institution and practice, is necessary to understand how political communities are made, un-made and re-made in the 21st century.

The course will be dedicated to general theories of citizenship, contemporary debates on membership and identity, as well as to various practices of citizenship and collective action in Southeast Europe. We will discuss citizenship in post-1989 Europe, in the West and in the former socialist East with a special focus on the post-socialist Balkans.

After examining legal and political uses and misuses of citizenship related to status and rights of individuals, we will further distinguish between active and activist citizenship as well as present and compare rising political and social movements across the globe and in this region.

Applicants can attend only one course from this list.

We are now accepting applications for the 2022 Online CFCCS Summer School.
Application Deadline is April 30, 2022.

For all questions and additional information please contact us at summerschool@cfccs.org.

You are using an outdated browser which can not show modern web content.